The Avoidance and the Fury 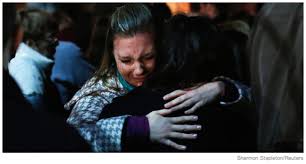 As a parent, a citizen and a human being, I weep for the little ones of Newtown, Connecticut. I mourn for their families, their friends and I weep for us, as a people, who keep enduring these senseless incidents. The Newtown tragedy cuts deep for any of us that are parents since we cant help but see our own pain in the anguished faces of those realizing that their children will not be coming home.  The kisses I share with my own kindergartener and pre-schooler always presuppose a tender repetition even though I know that there is no guarantee of any such thing. Its all so fleeting and temporary. Each story of the unfolding aftermath keeps offering me a reminder of this uncertainty and because of this I consider those that were lost to be my children. No. They are our children? In precisely the same way, the disturbed young man who shot them is also ours. So are the laws that so often make it harder for us to register to vote than to acquire the types of weapons used at Sandy Hook Elementary School.

So whats the appropriate response?

Avoiding the issue isnt the answer. Nor will our prayers and ritualized moments of silence be enough. We’re being called to act in the most profound ways. Despite this, the politicians and chatter class argue that its too soon to have a serious discussion about gun control, which is simply code for the very denial that keeps these tragedies showing up on our evening news. Running from the debate offers lawmakers cover so that they can keep their campaign coffers full and makes it sound as if they are working to preserve, protect and defend the Constitution. As long as this model holds there is little room for debate and no room for discussion. Not only does this lack of engagement allow for these gun tragedies to continue, it also allows for a broader dysfunction to flourish. No doubt, tragedies will continue to happen and shameful amounts of unconsciousness will unfold. But perhaps the tragedy and the cries heard from Newtown can wake us, and our representatives, from our cowardly slumber and inspire us to weave some sanity back into our gun laws.

Were hardly afraid of debate in this country. We can debate a womans right to choose and whether or not homosexual couples should enjoy equal protection under the law. What we cant seem to do is effectively figure out is how to debate the issues surrounding those mentally unstable people who legally gain access to, and then use, guns against innocents. These discussions will require civility and, let’s face it, Americans are great at heaping incivility on each other especially in the public square. Just turn on cable news. Listen to talk-radio. The vitriole can be so disheartening. But underneath the venom is nothing other than fear, and fear is the seed of anger. What are we afraid of? We fear that something we hold dear might be taken from us. One of the great truths that each of us realizes sooner or later is that everything will be taken from us no matter how tightly we might cling. So whats there to fear if everything in our lives is borrowed anyway? Whenever we truly listen and feel like were heard, we get the chance to see through our fear and anger tends to dissipate. What might happen if we did this in relation to our broader political discourse? What if we listened at least as much as we talked?  For the record, learning to listen effectively is not naïve, New Age crap. Its the appropriate path and it might keep us from having to so often console those who’ve had to endure what Newtown currently faces because our laws haven’t reflected common sense.

Common sense is in American DNA. None of us has to reach back to far in our memories to recognize that we are a people that can do amazing things. This isnt a nod to American exceptionalism. Chest-thumping, in general, and as it relates to our gun laws, specifically, represents us at our worst. We can, and must, do better than this. Rethinking and reimplementing sane gun policy will require silence, patience and courage not just for the political class and the punditry, but for all of us. And I’m convinced that we can do it. The historian, Shelby Foote, points out that  the genius of American politics is compromise.  Weve adjusted legislation relating to guns at both the federal and state levels in meaningful and effective ways before in our history.  It’s time we do it again. We just need the courage. For the sake of the dead and grieving, as well as the hopes and dreams that I hold for my own children and yours, I’m hoping that this tragedy helps all of us find our way.